Discover Jordan on a Luxury Tailor Made Tour

Discover a Kingdom of Treasures in Jordan, unveiled as a unique destination offering breathtaking and mysterious sights.

Arrival at Queen Alia International Airport, where you will be met and assisted with customs and immigration formalities, then transferred to your hotel in Amman for a 2 night stay (B).

Drive north of Amman to Jerash.   One of the most splendid provincial cities anywhere in the Roman Empire, the 2,000 year old city of Jerash. From the southern end walking ( past Hadrian’s Arch and alongside the impressive 244m long Hippodrome, where chariot races took place in antiquity, one enters the ancient city of Jerash, onto the lovely colonnaded Oval Plaza, connecting the Temple of Zeus, which overlooks it, with the main street, the Cardo, which is beautifully lined by Corinthian columns. Overlooking the Plaza is the extraordinarily well preserved and the most magnificent of all the city’s monuments, the South Theater, which seats more than 3,000 spectators. Walking through the magnificent Colonnaded Street, one can see the Market Place and the Omayyad residential quarter. Further up is a 4th century AD Cathedral, St. Theodore’s Church, the impressively carved Nymphaeum (public fountain), an Omayyad mosque, the arches of the West Baths and the North Theater. One can also see the Temple of Artemis and the western churches.

Return to Amman (B)

This morning drive to Mount Nebo which dates back to the time of the Prophet Moses, around the 12th century BC. It is believed to be the site of the Prophet’s burial place and the point from where he viewed the “Promised Land”. Visit the remains of the mosaic floors with stunning designs that feature hunting and pastoral scenes, found in the small church, built by the early Christians in the 4th century AD.   From a platform in front of the church, a visitor may see a bronze memorial of a snake on a cross, which symbolizes the serpent lifted up by Moses in the desert, as well as the crucifixion of Jesus Christ.

Proceed to Madaba, home of the most famous Byzantine mosaics. Visit the greatest and most significant of all the city’s treasures, the wonderful mosaic map of ancient Palestine, which is located on the floor of the Greek Orthodox Church of St. George. The 6th century AD map, hailed as the oldest in existence, was depicted for the benefit of the pilgrims on their way to the Holy Land, as it represented the surrounding regions as well.

The River Nile, the Jordan River, Lake Tiberias and the Dead Sea are easily identified on this map, in addition to many cities such as Bethlehem, Gaza and Jerusalem. One can clearly make out the walls, towers, gates, streets and buildings of the Holy City of Jerusalem, especially the colonnaded main street or Cardo, and the domed church of the Holy Sepulcher.

Optional:  A visit en route to Little Petra, a miniature Petra with a modest gorge (Siq el-Barid) that leads into the area of carved tombs and monuments. Of interest is the Painted Cave which is believed to have been a shelter for a sect focused on Dionysus, the ancient Greek god of wine, as it contains remains of Greek-style plaster artwork, quite unique for Petra, displaying tangled vines and flowers with brightly colored birds and Cupid-like figures.

Explore the legendary city of Petra which was carved entirely out of solid sandstone rock more than 2,000 years ago and has been recently voted as one of the New Seven Wonders of the World. The breathtaking ancient city is accessed by foot through the magnificent 1.2 km narrow Siq (gorge), which leads to Petra’s most famous 1st century BC monument, the spectacularly carved Treasury which appears dramatically as you enter the hidden city at the end of the Siq. The numerous stunning ruins of tombs, known as the Street of Facades, lead your way into the remarkable 3,000 seat rock carved Theatre, and the impressive collection of Royal Tombs. The once bustling colonnaded market street, leads to the Great Temple, the beautiful 5th century AD Byzantine Church and to the mighty Qasr el-Bint Faroun.  Overnight in Petra (B)

Available on Monday, Wednesday and Thursdays, but could be cancelled without prior notice.

You will walk from the Visitors’ Centre via the Siq (gorge), which will be lit with candles, up to the Treasury. The walk will take about 30 – 40 minutes. Once the whole group is gathered in front of the Treasury, a Bedouin – playing on the Nai – will walk out from inside of the Treasury towards the Siq, whilst another one will be playing on the Rababa musical instrument. An English-speaking guide will briefly narrate the history of Petra.

Drive to Wadi Rum best described by Lawrence of Arabia as ‘vast, echoing and God-like’ for its stunning natural beauty, and known by the Arabs as the Valley of the Moon for its moonscape terrain of ancient riverbeds, soaring wind carved rocks and smooth golden dunes, offering the most spectacular desert scenery in the world. Explore its stunning landscape and venture for 3 hrs. into the magnificent desert by an open-top Bedouin four-wheel drive vehicle while marvelling at the massive mountains, beautiful canyons, awe-inspiring rock formations, sand dunes & the remarkable desert sunset.

Proceed to your Bedouin camp for dinner & overnight in the desert. (HB)

This morning proceed to the Dead Sea for a 2-night stay at the lowest spot on earth; 423 metres below sea level.

Afternoon at leisure in the Dead Sea, where one can experience floating ethereally on its saline waters without exerting any effort. The extraordinarily unique healing and beautifying powers along with the relaxing feeling that this salt lake imparts, makes it an exceptional natural spa with exclusive benefits, ranging from the oxygen-rich atmospheric haze which filters out harmful ultra-violet sunrays to the soothing and therapeutic properties of its mineral-rich salty waters and mud.

As a health spa, the Dead Sea offers patients the opportunity to treat various ailments whilst enjoying the feeling of well-being that is an important part of the treatment. Many visitors return year after year for long-term relief.  Overnight Dead Sea. (B)

Free day for swimming in the salty waters of the Dead Sea.

The uniqueness of the Dead Sea has been known for centuries. This is the only place in the world with this particular combination of exclusive spa benefits: peculiar sun radiation and climatic conditions, enriched oxygen atmosphere, mineral-rich salt sea, thermo-mineral springs, and mineral-rich mud. In recent years, the Dead Sea area has become a health, rehabilitation, recreation and beauty spa. The combination of the year-round favourable climate, the thriving health and beauty centres, and the unique natural and historical tourist attractions, attract both vacationers and health-care visitors from around the world.  Overnight Dead Sea (B)

This morning transfer to airport for your continued journey. 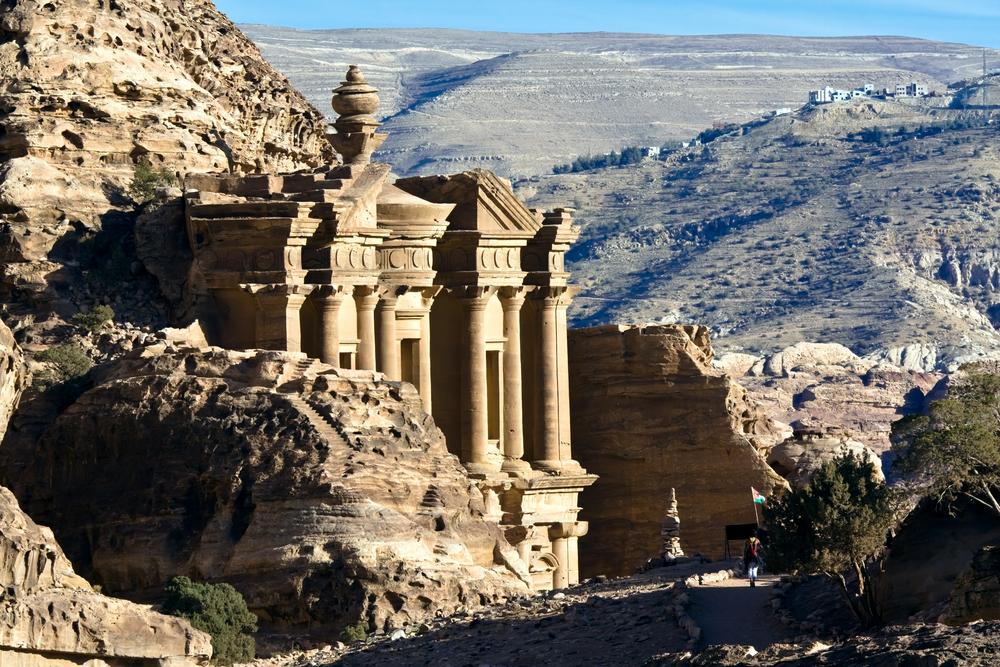 Daily on a private basis

Send us an enquiry about booking Essential Jordan