Embark on your own grand tour of discovery of Greece, taking you from ancient Athens to Thessaloniki, visiting the Sanctuaries of Apollo Pythios and the monasteries of Meteora.

Drive the coastal road we arrive at the Corinth canal for a short stop. We arrive to Epidaurus to visit the Sanctuary of Asclepios and the best preserved ancient theatre brilliant of its acoustic.  Continue to Mycenae to visit the great Homeric palaces with the Lions Gate, the Atrides Treasure, Agamemnon Tomb and the Cyclopian Walls. Finally onto Olympia through the Central Peloponnese and the towns of Tripolis & Megalopolis. Dinner and overnight in Olympia. D

After breakfast visit one of the most important sanctuaries of antiquity, dedicated to the father of the gods, Zeus. Olympia is the birthplace of the Olympic Games and also where they were first held – reputedly in 1000 BC. Visit the stadium and the archaeological museum before proceeding to Delphi, crossing over the magnificent bridge at Patras. Continue through the picturesque small Venetian town of Nafpaktos then onto Delphi. Dinner and overnight in Delphi. BD

Visit the Sanctuary of Apollo Pythios (Treasury of the Athenians, Temple of Apollo etc.) and the Museum. Delphi was considered the place on earth where man was closest to God, it is known as the centre of worship for the God Apollo, son of Zeus who embodied moral discipline and spiritual clarity. Afternoon at leisure. Dinner and overnight in Delphi. BD

In the morning, start the drive through the central Greece towns of Amphissa, Trikala, Lamia and onto Kalambaka. This afternoon visit the monasteries of Meteora. Dinner and overnight in Kalambaka.  BD

Drive via Trikala and Larissa to the famous sacred Macedonian town of Dion. After some time sightseeing continue to Thessaloniki, the second largest city in Greece and visit  its archaeological Museum. Dinner and overnight in Thessaloniki. BD

Morning drive to Pella, Alexander the Great’s capital city, the ancient capital of the kingdom of Macedonia. Drive to Vergina to visit the Tomb of the King Philip and the famous ’Vergina Treasures’.  Continue to Lefkada, joined to the mainland by a causeway, and visit the excavations before returning to Thessaloniki via Veria. Dinner and overnight in Thessaloniki. BD

After breakfast drive back to Athens via the Tempi Valley, Larissa, Lamia and Thermopylae famous for the ancient battle that took place there. Tour ends at your hotel. B 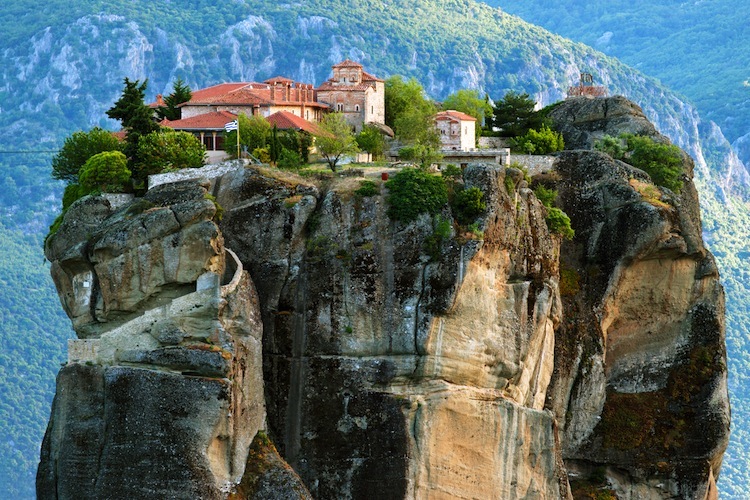 Send us an enquiry about booking Grand Tour of Greece