Discover Turkey on a Luxury Tailor Made Tour

A fabled land of Fairy Chimneys and Cotton Castles in yours to explore on this Grand Tour of Turkey.   Take a leisurely jaunt through Turkey to visit Istanbul's bustling city markets, pay tribute to the brave souls who lost their lives at Gallipoli, explore the legends of Troy and the symbolic famous Wooden Horse, the extraordinary excavations at Ephesus, the cotton castles of Pammukale, the mediterranean retreat of Antalya, the honey-coloured rocky spires of an underground city in Cappadocia, the youthful capital of Turkey, Ankara and return to bustling Istanbul.  This tour provides everything your heart desires of a trip to Turkey.

Arrive in Istanbul and transfer to the hotel. Overnight in the New City in Istanbul.

In the morning visit the aromatic Spice Bazaar from 1663 with its domed and vaulted shops selling spices and herbs along with a wide variety of commodities, also known as Egyptian Bazaar as it was once endowed with the Cairo imposts. Then proceed to the pier so as to embark the public boat. Sailing through the waterway separating the two continents – Asia and Europe – with a possibility to take pictures of the marble palaces, ancient wooden villas of Ottoman architecture besides modern residentials. During this trip Dolmabahce Palace, Ciragan Palace, Beylerbeyi Palace, Bosphorus and Fatih Sultan Mehmet Bridges will be visible from the sea. After having disembarked the boat get into the coach to drive back to the city. In the afternoon visit Topkapi Palace – Harem section is excluded; built in 1468 on one of the seven hills of Istanbul by Mehmet the Conqueror, the seat of the Ottoman sultans for 400 years and a huge complex serving as a museum today facing superb views of the Sea of Marmara, the Bosphorus and the Golden Horn. The palace houses the treasures of the Sultans including the extravagant Treasury with its magnificent jewels, and the priceless Chinese porcelain, one of the best collections in the world, weapons, calligraphy section, and more. Thereafter proceed to Grand Covered Bazaar, which is the biggest “souk” in the world with nearly 4000 shops of antiques, jewellery, gold, carpets, ceramics and leatherwear (B).

In the morning drive along the northern shores of the Sea of Marmara to get to Gallipoli, historically famous for being the site of many battles – particularly involving the Allied Forces including Australians and New Zealanders during World War I. Visit Anzac Cove where the Allied Forces landed on the 25th of April 1915 along with the other sites like Lone Pine-Australian Memorial, Chunuk Bair-New Zealand Memorial, 57th Regiment, the Nek and Kabatepe War Museum. Continue on to Troy with the replica of the legendary wooden horse of Troy and the site with nine inhabitation levels covering a period of 3.000 years and where the legendary Trojan War in the book of Homer’s of Smyrna took place. On to Assos for overnight (B, D).

After a short visit to the village in Assos drive to Pergamum (Rev: 2-12), one of the most beautiful cities of the ancient world whose architects and sculptors were amongst the finest in the Hellenistic world. The majestic acropolis looms behind the modern town. The places to be visited are Pergamum Acropolis with Temple of Trajan, Hellenistic Barracks, Library, Temple of Athena, Theatre, the steepest one in the world, Temple of Dionysus and the Altar of Zeus (the seat of Satan); Asclepion, one of the most famous shrines and therapeutic centers in the ancient world. Then drive on to Sirince Village for overnight (B)

Drive to Selcuk to visit Ephesus Antique City, impressive structures we will see include the Library of Celsus, Temple of Hadrian, Theatre and Odeon (Hillside Houses are excluded; entrance requires additional admission fee), one of the most popular ancient sites of Turkey with many acres of carefully excavated ruins. After visiting Virgin Mary’s House and Church of St. John time for shopping. Thereafter, continue on to Bodrum for overnight (B)

Bodrum city tour; visit the Bodrum Castle (Except the main admission fee all the other sections are exclusive and need to be paid by the guests locally), which now houses the Underwater Archaeology Museum, then the Antique Theatre, and the remains of the Mausoleum, one of the Seven Wonders of the Ancient World. At leisure in the afternoon. Overnight Bodrum (B)

Drive to Aphrodisias, the city of Aphrodite; visit the Museum, the Temple of Aphrodite, the Theatre, the Stadium, the Agora, the Hadrian Baths, the Odeon, and the Bishop’s Palace. Proceed to Pamukkale “Cotton Castle”, the ancient Hierapolis famous for healing thermal/mineral baths and beautiful petrified waterfalls. Visit to the historical site including the magnificently preserved Necropolis, the Main Street and Gates, the Thermal Baths, the Apollo Temple with the Devil’s Hole and the masterpiece Theatre (B, D)

Drive to Antalya to visit Perge with its well preserved theater and stadium, the place where most of the statues that are on display in Antalya Museum were unearthed and then proceed to Aspendos that bears one of the best preserved Roman theaters in Anatolia. Overnight Antalya (B)

Day at leisure (B)
Optional: Tour of Termessos and Antalya Archaeological Museum

Optional: Early morning hot air balloon flight. Experience of floating through volcanic valleys, fairy chimneys and caves with the sunrise of Cappadocia.
Visit to Devrent Valley where various types of fairy chimneys are abundant. We will walk through this amazing valley. Thereafter visit Pasabagi (Monk’s Valley) with multiple stems and caps, peculiar to this area. After visiting Pasabagi, drive to Avanos which is known for the pottery, a craft dating back to the Hittite period. The red clay which is worked by local craftsmen comes from the residue in the Kizilirmak River, the longest river of Turkey. Further to the time for lunch proceed to Goreme Open Air Museum (Dark Church is excluded; entrance requires additional admission fee) to visit the churches, chapels and monasteries carved into the fairy chimneys from the 10th to the 13th centuries with frescos painted on the walls. Thereafter time to take photos in the neighbouring valleys before going back to the hotel. Overnight Cappadocia (B)

Drive to Hattusas. Visit Yazılıkaya to see the open air sanctuary and the capital with Lion’s Gate, Tunnel, King’s Gate, Citadel and Grand Temple. Then drive on to Ankara and overnight (B)

Visit to the Anatolian Civilizations Museum at which numerous remnants from Stone Age, Neolithic Age, Hittites, Urartians, Phrygians and many others are on display; Citadel of Ankara and the Mausoleum of Ataturk, the burial place of the national hero who founded modern Republic of Turkey. Proceed to the airport for the flight to Istanbul. On arrival, transfer to the hotel in the Old City. Overnight Istanbul (B)

A morning tour with Blue Mosque (May be closed on Friday mornings and the last minute occasions beyond our control and therefore no responsibility is assumed), famous for its mosaics with some 20.000 blue Iznik tiles and its six minarets, built in the name of Sultan Ahmet in the 17th century, one of the best examples of classical Turkish art. Cross through the Hippodrome, the scene of Byzantine chariot races, athletic events, victory celebrations and political activities of the old city where one can also see the “Obelisk of Egypt”, “Serpent Column” from Delphi, the “German Fountain of Wilhelm II” and the “Colossus”. St. Sophia (Closed on Mondays during winter months), one of the great architectural marvels of the ancient world, constructed as a basilica in 536 AD by Emperor Justinian, turned into a mosque in 1453 and now into a museum, takes the breath away with the sheer size of its interior and its magnificent dome. At leisure in the afternoon. Overnight Istanbul (B) 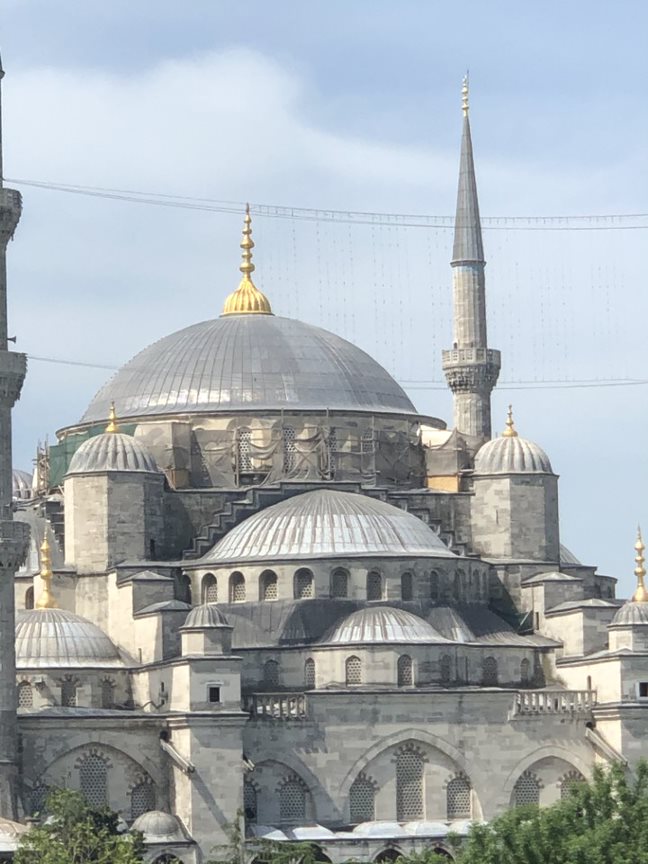 Daily on a private basis

Send us an enquiry about booking Grand Turkey with Boutique Hotels